Ed Boks : "I'm sticking it out at long as I can." Is Linda Barth on deck to be the next GM?

After City Councilmember Richard Alarcon launched his explosive press release (see previous post) declaring that Council has made a motion of "NO CONFIDENCE" in General Manager Ed Boks, we are forced to wonder how many lives has Ed Boks? Is he "done" or just "medium well?"

Since January 2006, when Boks landed his carpet bag on our shores, blunder after hopeless blunder have sunk the stock value of Ed Boks in the Los Angeles animal community. But what's the bottom for Ed? Will Villaraigosa take this golden opportunity to extend a hand pointing east? We've seenBoks rise from the ashes so many times before that we're not yet convinced that, having stuck the fork in, Ed Boks will be "DONE."

Boks told reporter Rick Orlov, "I'm sticking it out as long as I can" after the fed-up council members Zine, Alarcon, Cardenas and company fired the first shot.

Linda Barth. Hmmm. Cardenas repeatedly called her "Linda" at the March 27 Council meeting. We are concerned with this apparent affection for Barth Vader. She rattles off facts quite well and has been in City government for so, so long.

[ this paragraph edited and revised 4/4/09] However, she's dirtier and smarter than Ed ; and judging by the employee complaints about Barth, much worse. A Department under Linda Barth would be a closed and secretive one and perhaps even deadlier than Boks's Department. How calculating is she? Watch the 3/27/09 Council Meeting video again and check her costume for Ed's Inquisition. She wore a blazing winter white ensemble which screamed, "I'm innocent. Pick me." Barth also has a tell. She drops her chin down and does a closed hand scratching thingy on her ear/neck wih her right hand...See video beginning at time-stamp 2:00:00. First tell is at about 2:01:20. This little tell, judging from when she does it is a sign of extreme stress for her.Sometimes she does it when she's obviously lying. Sometimes she does it when it would appear that she's fearing for her own ass, as well. Check it out.

Will she turn on Ed to save herself and position herself as ready willing and able to run the show? God help us, if he's still listening! Did she set Boks up? Time will tell. It's a real possibility that Barth will be at least the next "interim" general manager. She's got the facts and figures ready to spit out and recently she's been showing her Dr. Jekyll face. We encourage you to watch the video of the 3/27 meeting again here beginning at about 1:18:00.

So whaddya think? Are they prepping Barth to take over or do you think they will go for someone less controversial. She's no saint in this Department Chaos. More later, with a personal Barth Anecdote from Jeff de la Rosa.
Posted by BoardWatch on 4/02/2009 06:18:00 AM No comments: Links to this post 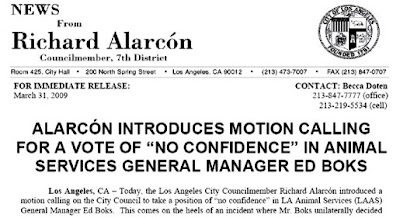 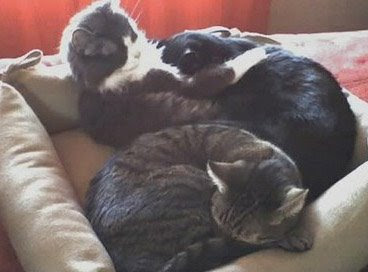 Pictured: Mama Cat with her paw on Cole. Brother Will, sleeping in front.

The rescuer in need has rescued over 100 animals from L.A. City pounds and found them good and kind forever homes at the cost of thousands upon thousands of dollars. She's in a financial bind at the moment. Please give what you can.

On Saturday, adorable and faithful friend Cole was attacked by a dog living with him.
We were able to stop him from being killed but his rear leg is badly broken. Surgery will cost $3000 in Los Angeles. So far we have had him stabilized and he is receiving antibiotics, pain medication and 24-hour care.We are trying to raise funds for his surgery. The alternative are not what anyone wants: amputation (less expensive but not fair) or euthanasia (unacceptable). Please donate as much as you can, even small donations of $5 or $20 dollars will help. We have raised $469 so far but he needs surgery ASAP to prevent having to re-break the leg if it start to heal incorrectly.
Please cross-post a link to this post anywhere and everywhere you think will do some good.Absolutely ALL donations will ONLY go for Cole's care. Thank you.
Jeff (&Cole)

>Jen Byrne wrote: "There are a few people that I know of that are planning on fighting this Proposal. So we need people to come to this meeting and voice their opinions on how intact dogs in the dog park can negatively affect YOUR visit to the dog park."

Well, first what is the "Major" problem this is causing? Yes, can use my imagination but would rather learn what the problems are. Any stats? Reports? A file of complaints?

As it stands, I am against this. All of my dogs have always been spayed or neutered, that is my belief concerning population, etc. However, the City has not BANNED unaltered animals. Some of these animals are legally intact. If you argument is with the current law then please address the current law.

With Boks's antics this past few weeks and economic things being what they are, there are going to be unaltered dogs. Of course, many people are ignorant and stupid. Others have dogs which are legally unaltered for whatever reason. Any resident of L.A. who is not breaking the law or the standing rules at the parks should have full use of City services.

That is how it is in a free and democratic society.

On its face, this proposal is draconian and fascist (sorry but it is). There are better less drastic ways to address this problem, and if I attend the meeting, I will present them.

What's next? Breed banning? Ban dogs which drool too much or dirty up the water bowls?Let's ban dogs who pee on the park i. Ban marking dogs. Ban dogs with bad breath or who paw you with a muddy paw. In my 15 years in the LF,SL,EP area, I have never seen owners at the SL dog park more responsible and courteous then they are now. This is a great achievement and I'm sure Jen has something to do with that.

The solution lies in the responsibility, or lack thereof, of the dog's owner/guardian/pet-sitter/walker for dogs' behavior at the parks. The cure for stupidity is not more laws. Who is going to enforce this? Are citizens going to be running people out of the park. Will there be violence? Should we spray them with the hose. Are you going to call a ranger every time you see testicles? How will you know if a female is spayed or not? The cure for stupidity is not more laws. It is education and reason. With Boks, we have neither. We do it on our own and with the help of many dedicated organizations and individuals. Let's not start hatching Boksian lame-brained proposal. 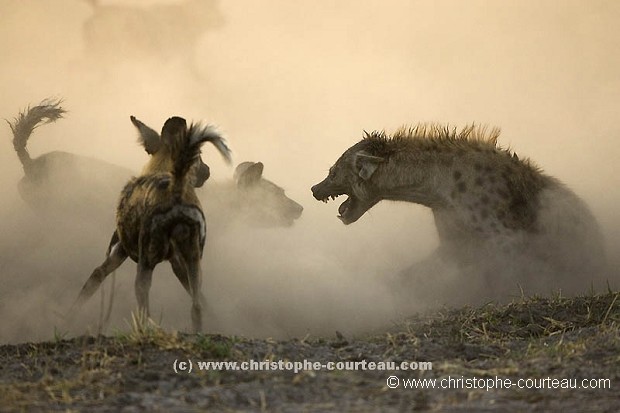 Alice Walton (and others) reported on the March 27, 2009 Boks Inquisition which was skillfully executed by Councilmembers Alarcon, Cardenas and Zine, who we will now dub as Council's Musketeers. As her closer, Walton used a quote from Boks, "This is a difficult position for anybody, and every (Animal Services) general manager has come under attack from various factions," Boks said. "There is no way to please everybody." So our City Council is now a "faction?" Ed, you can't please everyone, as you've said; but you're pleasing NO ONE! There's a word for someone who can only please himself. Ummm...maybe later.

Alice Walson's (FOX) complete article is below. The writing from various reporters on this spay/neuter/Boks saga has treated us to an all- out no-holds-barred splash of colorful journalism, using very colorful metaphors, adjectives and adverbs. So far our favorite is:
"[Council] descended on Boks like a pack of wild dogs."

Over the next few days, we'll cull the best of the best and post them here. Feel free to post your faves in comments.

Los Angeles (myFOXla.com) - Two City Council members called today for a "no confidence" vote on the general manager of Animal Services, after he was grilled for an hour over a decision to temporarily suspend vouchers for spay and neuter services.

Ed Boks appeared before the council to rehash the budgetary problems that led his department to stop issuing $70 coupons to Angelenos with an annual household income of less than $30,300, and $30 coupons for other city residents.

Though the $70 vouchers were reinstated earlier this week, council members wanted answers on why they and Animal Services commissioners were not told of the decision before it was announced to the public.

Councilman Tony Cardenas co-sponsored a city ordinance last year that requires sterilization of most cats and dogs by the time they are four months of age. He said that without the financial assistance, pet owners were less likely to have their pets fixed, which could ultimately lead to overpopulation of city animal shelters and a higher euthanasia rate.

"They're getting at each other right now more than any other time of the year," Cardenas said of cats and dogs. "This is the time of the year that we need these animals to be spayed and neutered, and we need human beings to carry them over to get them spayed or neutered. I've never seen a dog or a cat walk into a facility and say `Hey, cut me up, take care of me.' It's human beings who have to take care of that."

The city's mandatory pet sterilization ordinance took effect Oct. 1, and since then, Animal Services has not been able to keep up with the demand for low-cost vouchers.

The continuing deficit was the reason behind temporarily suspending the issuance of coupons, Boks said.

Council members voted today to reinstate both coupon programs by next Friday. Paying for that service means Animal Services will have to layoff employees, Boks said.

"I have no options left," he said.

The frustration of a handful of council members was similar to the tongue-lashing that Boks got Monday at the Public Safety Committee meeting. To illustrate his displeasure with the situation, Councilman Dennis Zine held up a cardboard box that he said was filled with complaints from Animal Services employees.

"Mr. Boks, I'm going to be very candid. I have absolutely no confidence in your honesty, your ability to run a department," Zine said.

Councilman Richard Alarcon said Boks' failure to consult with commissioners or council members prior to making his decision on the voucher program was another failure of the department. He made a motion to send a "no confidence" letter to Mayor Antonio Villaraigosa.

"I believe it is time for us to move on, and that is the real discussion we are having today," Alarcon said.

For his part, Boks said he is committed to staying in Los Angeles.

"This is a difficult position for anybody, and every (Animal Services) general manager has come under attack from various factions," Boks said. "There is no way to please everybody."
Posted by Jeff de la Rosa on 3/29/2009 12:44:00 AM No comments: Links to this post