90210 Wakes from their slumber: Low cost spay/neuter coupons for low income? What's that?

To be fair, BH residents should really care about the most recent Ed Boks debacle/bluder--because really, they don't need $70 coupons for spay/neuter. C'mon though, Ed Boks's head was plattered-up before the City Council on March 23. April 9th is a bit late to be reporting on this story.+/- Read more...

Maybe the problem over there at the Beverly Hills Times Magazine is that they have a reporter named "mike." That's it. Just "mike."
April 9 , (2009) (No prob, mike-we'll fill in the year for you.)
Ed Boks, manager of Los Angeles’ Department of Animal Services, has said that the department is returning to giving low-income residents vouchers for free spaying and neutering of their pets. Boks had suspended the program two weeks earlier, but animal-welfare advocates protested. So did members of the Los Angeles City Council. “It’s time for Mr. Boks to find another place to work,” Councilman Dennis Zine said. “It’s been a continuing saga of him and his mismanagement.”

There are so many things wrong with this tragic story that it may be difficult for you to believe. However, I've verified everything personally. It's all horribly true. Help Mary O'Connor. please. The City has shunned her and stolen her friend, companion and trusted Emotional Support Animal, named "Hambone." 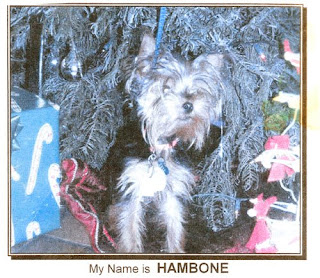 Mary O'Connor is a 32 year-old woman who loves animals. She loves her animals the best. s Mary doesn't just love her animals, she needs them. Mostly alone and living for the past few years on the razor's edge in Los Angeles, a doctor has prescribed these animals to help comfort Mary through the pain of 3 debilitating conditions, which make it nearly impoosible for her to hold a job. Endomitriosis, severe Depression and ADHD make every day a real struggle for Mary just to get through.

'"Hambone" is a 3 lbs. "tea-cup" Yorkshire Terrier, which Mary purchased from a reputable breeder because she needed a very small dog to take with her everywhere. "Hambone" is a registered Emotional Support Animal given the same privileges under the Law as any other Service Animal. Ham is not spayed-She is exempt as a working animal. She was only 9 months and is now 1 year old. She is micro chipped. Mary is disabled with 3 conditions and is lost without Ham. She can't sleep and worries about Ham constantly. How did Ham end up in the pound?

Mary O'Connor was evicted from her apartment for having animals. In Court, the Judge wanted settlement. Mary's defense was that her animals were registered support animals. True. Mary agreed to leave the apartment and the landlord paid her a settlement to avoid a discrimination lawsuit. It was a small settlement. With part of that money, she purchased Hambone.

Then it happened again. She was evicted again for having animals. This time she was physically removed from her home and abused by an L.A. County Sheriff Deputy on December 18, 2008. Los Angeles animal services seized her animals, including Ham. They told her to pick them up when she had a place to live. NO CHARGES WERE FILED. On January 9, 2009 Mary was raped in the City of Los Angeles. She had no dogs with her at the time. LAPD refused to press charges although Mary picked the RAPIST, "Noah" out of a line up.

Mary attempted to redeem the animals on January 12, 2009 and was told the following by Lt. Transo, an Animal Control Officer:

LAPD is investigating but Detective Jesse Linn is unable to devote any significant time to finding Ham. He does, however firmly believe that an employee from the North Central Animal Shelter STOLE THIS DOG. THIS TRAIL IS TWO MONTHS OLD AND GETTING COLDER BY THE HOUR.

Mary has petitioned and BEGGED the Department, City Council and LAPD to please find her dog-- especially since they know a City Employee stole her! 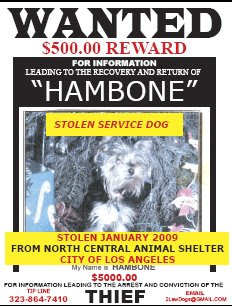 click to download REWARD/WANTED POSTER
Coincidentally, OR NOT, 5 teacup Yorkies were sold for as much as $5000 each by Ed Boks in his last grandstanding stunt for 2008. When? Two days after Hambone was impounded.

Please click here to sign petition. In your petition comments, please show your disgust for the behavior and inaction by these officials. Please email us to be on the list to distribute flyers to all vets, stores and other places where Ham may be spotted. LABoardwatch@gmail.com

Mayor's Office:
Tell Jim Bickhart to "allow" the Animal Services Board of Commissioners to order a complete investigation of this case. The employees at the N. Central Animal Care and Control center MUST be questioned.
Jim Bickhart Jim.Bickart@lacity.org

City Council:
Councilmember Ed Reyes councilmember.reyes@lacity.org or ed.reyes@lacity.org
This unlawful eviction happened in YOUR district, Mr. Reyes; and the dog was STOLEN IN YOUR DISTRICT. Where is your motion to council for an investigation of employee theft at the shelter? Where is your motion for REWARD MONEY for the safe return of this dog and the arrest and conviction of this evil thief?

Today's East Valley Story. There are many. 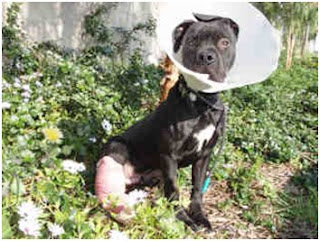 You may remember the last 9 months-old bully I tried to save from the needle, but couldn't due to the phone problem which is years old and still not fixed.

Here's another 9 months old bully RED-LISTED , right on time (as his time ran out).

From REGULAR LISTING (WHAT THE PUBLIC SEES WHO KNOWS NOTHING OF NEW HOPE):
KONA-ID#A1010469
My name is Kona and I am a neutered male, black and white American Bulldog mix.
The shelter thinks I am about 9 months old.
I have been at the shelter since Mar. 26, 2008.
This information is less than 1 hour old.

No return call from Valerie.

I figure it's fine. He has 4 more days ...I'll call again on Monday (closed) but will get a rescue org to call.

So...he's either rescued/adopted or killed after only 3 days on the REDLIST. Can't wait to find out. I am not encouraged. If anyone knows, please comment below. Thanks.
What is the "bump schedule?" I feel they should kill no animals on weekend (no NH coordinator) or Mondays. Really, they should kill no animals while the shelter is closed.
.
Posted by Jeff de la Rosa on 4/06/2009 01:30:00 AM 2 comments: Links to this post