An announcement released this morning from Animal Defense League- Los Angeles, which appears to put their stamp of approval on Brenda Barnette's appointment,is, as usual... over the top. I don't recall if Barnette was ever endorsed by ADL-LA as a candidate who must be considered. You'd think that with this flowery endorsement, that she would have been in their top five--at least.

We may finally concede to the Mayor and Jim Bickhart that they have done their homework this time around and must sincerely want to reform our city shelters from the Death Camps they currently are into a shelter system the public can rally around and most important of all, animals' lives can begin to be saved and LA may be truly become a City of Angels to our lost and homeless animals.
+/- Read more...

No mention of Barnette's AKC affiliation, rumored "breeder" status (sort-of-denied by Barnette, but not really) and her apparent lack of support for mandatory spay and neuter laws (which I have doubts about anyway, because they don't work and are unenforceable). Not one mention of the vast differences between Barnette's last post and her new nearly impossible task.

For nearly a year since the ousting of Ed Boks ( journalists: PLEASE stop saying he that he quit--that's about as accurate as using the term "euthanasia" to describe the slaughter of animals at the pound), ADL-LA has fired-off scathing and accusatory emails and announcements declaring "corruption" and other bad-boy behavior when describing the search for a new G.M. by the City's recruitment firm and Jim "BigFart" Bickhart (their nickname, not ours).[edit] I missed this the first time- Pam now describes the search process as "professional and state-of-the-art." Huh?[/edit] Yet, with a real twist of tone, Ferdin applauds Barnette's record in Seattle which achieved a 90%+ save rate on animals taken in.

Ferdin says nothing about the fact that Barnette's Humane Society could turn away any animal they wished , charged a reportedly $200 intake fee and serviced an area a small fraction of the size and population of Los Angeles...with no government control as they are a privately funded non-profit organization.

Don't get me wrong, I want Brenda to be the real deal, but I am realistic in recognizing the challenges she faces in a completely different environment with completely different rules, laws, politics and demographics. I suspect that Nathan Winograd is supportive of Barnette's appointment (although he hasn't made a peep yet) and that ADL has been softened by a blessing from the "No Kill" man himself.

Too much , too soon from Pamelyn? Yeah. But that's how they roll: fast, emotionally-charged and reckless. We'll see what the "in-depth" research shows which she states will be performed in "the next 72 hours."

The complete announcement from ADL-LA:

Obviously we were completely shocked (with pleasure) that the Mayor and Jim Bickhart finally did the right thing for the animals, and ADL-LA is going to go out on a limb here and say that not only must there have been progressive shelter leaders on Jim Bickhart's "secret committee" but one of these top notch leaders apparently decided to apply for the job!

Our cursory research we have done in the past twenty four hours shows Barnette as having a stellar track record of saving 92% of the animals that are impounded at Seattle Humane. We also found out that in her first year there, Barnette implemented programs that resulted in cutting the kill rate 22 % ! We were told by a volunteer in Seattle that the employees admire and respect her immensely, and that several volunteers and employees began to weep when they heard she's leaving!

BUT WAIT! No more pickets at the Mayoral mansion, Bickhart's neighborhood and other city officials?
It seems that if Barnette is as good as what our cursory search found, we will be officially suspending our six year campaign to Stop The Killing in LA city shelters for at least one full year. Our members and other picketers will move on to other campaigns like picketing stores that sell puppies from puppy mills or maybe some members might even decide to volunteer and rescue animals at LAAS once it's being led by Barnette whose history of implementing life saving measures in Seattle is going to now advance our city shelters out of the "catch and kill" 20th Century and into the 21st Century!

In the next 72 hours ADL-LA plans on doing the same type of in depth search of Barnette as we did on Ed Boks, Guerdon Stucky and Sharon Morris (all three who we found out were as bad as their previous job history proved.) We plan on doing the same thing with Brenda Barnette and hopefully by Tuesday or Wednesday of next week we can give you a full review of what we found out about her by those who actually work and/or have worked with her as well as those who volunteer and rescue from her shelter.

But suffice it to say that if she proves as good as our cursory check on her proves, ADL-LA and the three other plaintiffs will NOT file our law suit against the city for not disclosing the public records showing how the search was conducted and by whom. We will save our money, time and effort for more important things since the recruitment procedures and committee members must have conducted the search in a professional and state-of-the-art manner in order to hire someone with such a stellar life saving history for the lost and homeless animals in Seattle.

We may finally concede to the Mayor and Jim Bickhart that they have done their homework this time around and must sincerely want to reform our city shelters from the Death Camps they currently are into a shelter system the public can rally around and most important of all, animals' lives can begin to be saved and LA may be truly become a City of Angels to our lost and homeless animals.

You can read about Ms. Barnette in this nice fluff piece and wonder for yourself whether this is the right choice for a huge , near bankrupt city wrought with city and union politics and back-stabbing. Will she bring her 6 dogs ("most" are rescues) with her where we can only have 3? 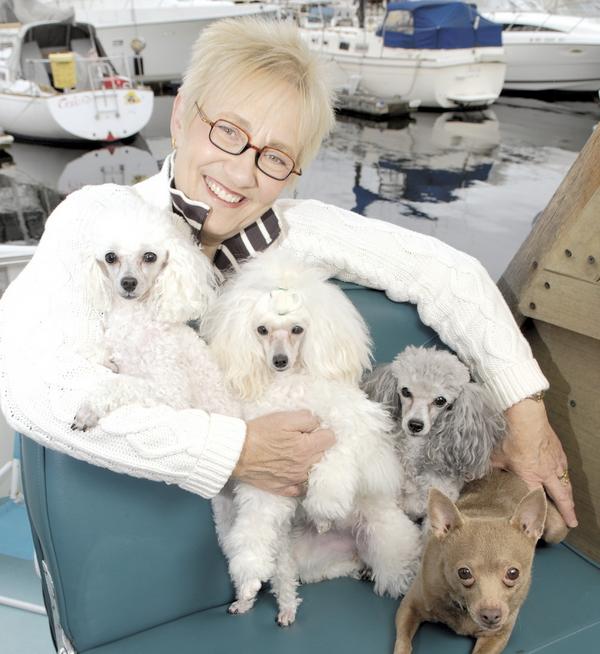 I don't really feel like writing about this. Linda Barth will eat her alive if she's not smart or even if she is. I wish her luck, but predict that she will soon long for her quiet life on the boat at Lake Union. At her new salary, she could dock at Marina del Rey...

Waiting for Nathan reaction...and Pam's. Small dogs will have a friend. What about the pit bulls?