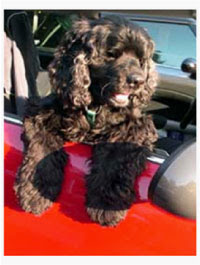 One night in 1995 I came home to see a bouncy and black Cocker Spaniel trotting down my street in Los Feliz. I followed and the little dog stopped on the corner across the street from me. I sat on my corner and waited. She sat on her corner and looked at me for about 10 minutes. Finally she got up and trotted over to say, "hello." She was clean and well-groomed, so I knew she belonged somewhere. I placed an ad in the L.A.Times classified. The next day, a woman called saying that she has rescued "Annie" from the streets near Adams Blvd. months before. She had been a mess, was matted and filthy. While recovering with her rescuer/foster mom, Annie raised a litter of kittens and slept in their box with them.

The rescuer said she had placed Annie in a home in Beachwood Canyon, about 2 miles away from me, but Annie had escaped the yard on the first night by chewing through the wood fence and ended up facing me down on a corner in Los Feliz. The rescuer came by and confirmed the dog was indeed Annie and asked me if I would like to keep her. I said, "Absolutely, yes!" "Good, " she said. "She seems to like it better with you" --besides, I had a young kitten, Grace; and by now, Annie had taken her under her wing.

Over the years, Annie traveled across the country several times with me, always on her black pillow on the passenger seat, sporting her red collar . Once she locked me out of the car at truck stop at night by flicking the lock button while the motor was running. Other than that , she 's been my best friend and my most loyal companion. She's outlasted 5 girlfriends and was better to me than any of them. When I brought Maeve home at 8 weeks old, Annie took charge of her, too. She remained in charge as Maeve grew to be an 80 lbs. beauty. Then Stu joined us. They ignored each other for the most part, but I have caught them cuddling together on occasion. Annie hated the dog park. While Stu and Maeve played, she would sidle up to the nearest bench and wait for a human to come and adore her. She preferred people to everything, except kittens. 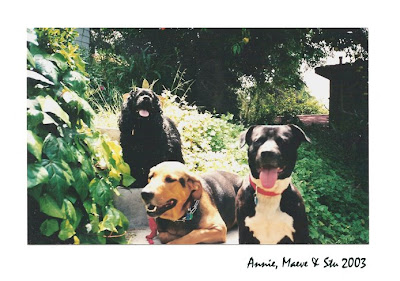 Annie has been mauled by a big dog on the Elysian trail, suffered glaucoma and the loss of one eye and so many ear infections that she finally went deaf. Losing those senses never phased her as she marched on with that Spaniel nose and never complained. Her love was unconditional and I returned her love by staying by her through all of her ordeals and her joys. She was always a happy little pup and let me know it. She wasn't a kisser but she would rest her head on my knee as a sign they I was hers.

For the last several days, Annie has been letting me know that she would be leaving me soon. She stopped eating. Then the next day she stopped drinking water. She has been weak and stumbling. Last night I gave her water from a syringe as I held her in my arms, crying. At about 3 a.m., I put her down on her bed and I went to sleep. This morning we were going to the vet to confirm what I already knew: She was at least 16 and her time left with me was short.

I picked her up from her bed and gave her a paper towel , so she could pee because she could not stand. Holding her in my arms, I tried some more water. She took a few drops and lapped it up. Suddenly, her legs thrust out stiffly as she took her last breath or her heart gave out. Her tongue went still and her mouth hung open. Then her head fell onto my chest and her little plush legs went limp. She was gone.

It was as if she had waited until I could be with her before she departed. I'm sure of it

She did not complain this morning but for a tiny little whimper seconds before she left me.

I will miss her more than words can describe. I had hoped she would be here when Stu comes home. I hope Maeve will be alive when he does. I wonder if he felt her go.

Board of Animal Services Commissioners moves to amend L.A. Code to free Stu!

The Board convened at about 10:30 (a half-hour late) and immediately began discussion of Item 3A regarding Stu. Although newly installed Interim General Manager, Kathy Davis was present for her first meeting ever, but she did not even get an introduction. I can't say I've ever even seen her before but she sat next to the City Attorney in the GM's spot...and was entirely silent.

The Board took Public Comment from a large group of concerned citizens, some who traveled from as far as southern Orange County to support Stu. The Board requested that no action to "euthanize" Stu be taken at this time. At 11:05 the Board withdrew to closed session to consult with Assistant City Attorney Laurie Rittenberg, the supervising attorney on Stu's court cases.

Although the Board estimated that they would return to open session at 11:45 , they did not return until past 12:30 p.m at which time, Commissioner Riordan introduced a motion that the Board make a recommendations to Council to amend the Los Angeles Municipal Code section covering "dangerous" dogs which would allow the Board to modify a "dangerous" designation made by a general manager, even long after the appeal process has been finalized. Commissioner Riordan stressed that the amendment be retroactive to cover Stu's case. Commissioner Ponce seconded the motion and it was passed 4-0 (Commissioner Secunda had left the meeting by this time and did not take part in the vote).

What this means is that , at a subsequent public meeting (presumably on July 27, 2009), the Board will actually make a recommendation to City Counicl to amend the code in order to give the Board the power to reverse a GM's decision AFTER the appeal had been finalized. I take this to mean that the Board, once empowered by the code change, intends to remove the "dangerous" designation from Stu which would allow the Board to send him home under reasonable terms and conditions for his care and control.

I do not know how long this will take, but apparently the Board intends to ask the Coucil for an expedited consideration of their request for the code change.

I'm a little frazzled by the whole thing beause it doesn't seem real. I'm encouraged, but I will believe it when I see it. This could take months or weeks or the Council could refuse to the amend the code.

NOTE: The Board will hold their annual elections for President and Vice President on July 27. Last time the "election" was more of a mayoral "appointment" of Tariq Khero as interim President following the resignation last fall of Glenn Brown. Who's up?